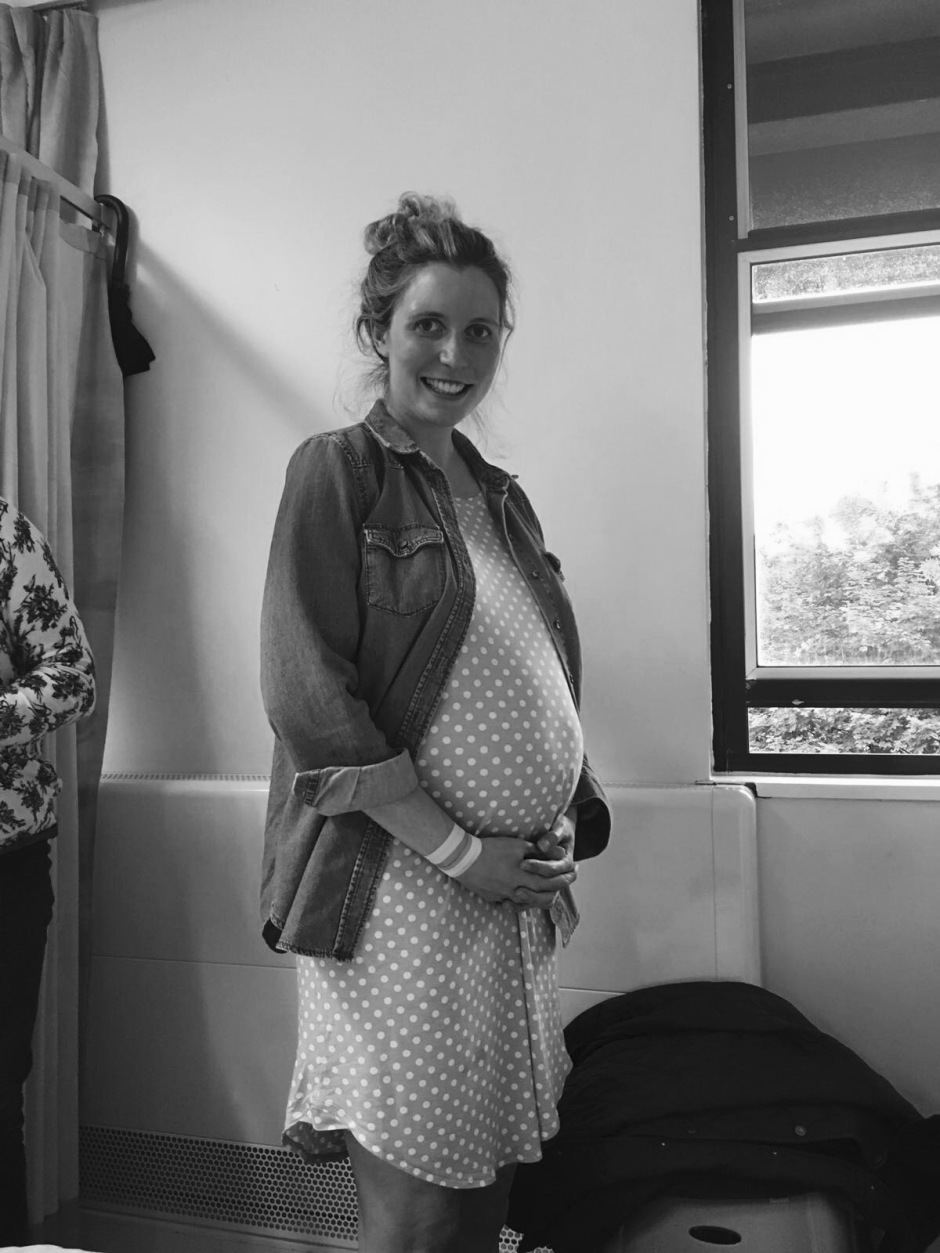 05:00 Cereals (from cupboard) and peppermint tea: I actually got excited about which of the Kellogg’s selection boxes I was going to eat. I know I’m sad when it comes to cereals. I had to waddle to the kitchen to make and eat these. An opportunity to say “good morning” to the nurses and stretch my legs. I brought the tea back to bed with me.

Then I’d read my book or magazines or do some colouring in.

Observations: The midwife, nurse or student nurse would listen to each of the babies’ heart beats, give me my drugs (always given in a little white bun case) and have my temperature and blood pressure taken. I soon got used to having my blood pressure taken as I previously hated the feeling of my arm being squeezed.  I would have my blood taken every couple of days to check my infection markers. Even though I loved hearing their heartbeats and was so proud that both girls were hanging on in there, I always felt anxious. What if she only heard one? I always had to hear them before I went to sleep. I would watch the midwife’s face intently as she made sure she was listening to two different heartbeats. Sometimes it would take her a little longer to find them, as they kept wriggling and this would make me tense up. I immediately relaxed when she said they both sounded great.

Listen to the radio and sleep: This was often my favourite sleep (other than falling asleep with Connor next to me watching a film). I enjoyed watching the sun rise over the city and feel the cool morning breeze on my face.

10:30  Ward round: The consultants often didn’t have much to say to me as my infection markers stayed below 5 (normal), my observations were good and it was mainly about getting as many days as possible under my belt. The scans showed Twin 1 was still standing on her cord so it was best that I stayed in hospital for risk of a prolapsed cord. As the weeks went on they encouraged me to leave the ward for some fresh air and sanity.

Shower time: I’d always forget to ask the nurses to take my compression socks off and found it very difficult sitting on a plastic chair in a narrow space, reaching over my bump to take these super tight socks off. Not a pretty sight. I’d never enjoyed a cold shower but I did during those weeks. The cold water pounding on my head and running down my body felt so refreshing. I would close my eyes and pretend I was somewhere else. I often had a cry in the shower. I would look at my beautiful bump and then look at the plain hospital bathroom and feel so upset that this was where I was. I felt lonely and trapped. I couldn’t go out and show people my beautiful bump or wear all my lovely maternity clothes and go into town.  I lived in fear of what might happen if I was to go into labour. I often imagined that I would have to pull the red cord whilst in the shower. During one shower I felt really strange movements and shot out, wrapped a towel round me and went to find a midwife. She informed me it was just the babies moving and since Twin 1 wasn’t in her waters and that I wasn’t lying down, I would feel them differently. I felt so relieved but still went and spent most of that day lying down with my legs firmly crossed. Before I got out of the shower, I always pulled myself together. I felt much better after a good cry and was able to put my brave face on. I got changed and pulled my positive pants back on.  I reminded myself to stay strong for my girls as for each day I kept them in, the bigger and stronger they became. After I’d covered my bump in Neal’s Yard Mother’s Balm and moisturised in Laura Mercier I felt pretty good and ready for my day. 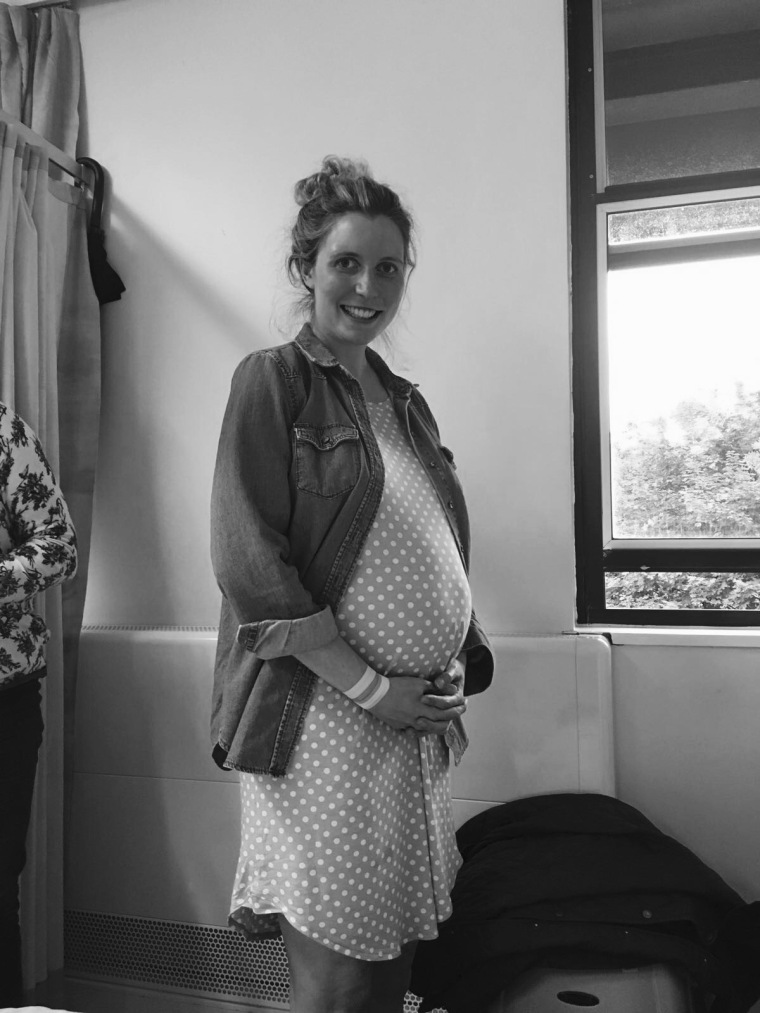 11:00 Connor arrived: He always greeted me with a big kiss and cuddle and gave my tummy a couple of pats for each Twin. I placed his hand on where they both were and we loved it and got all giddy when they gave his hand a big kick. Their kicks were getting stronger by the day. I updated him on all the patients in the ward and told him again what the consultants and doctors had said on ward round.

On the days on which Connor worked, my Mum came to keep me company. I’m so grateful for everything she gave up to come and sit with me. I think she also loved it as she got to watch Wimbledon without being interrupted. Just kidding Mum! Love you x

12:00 Lunch: sandwich or jacket potato with beans or cheese and a thick & creamy yogurt.

17:00 Tea: I didn’t think the meals were too bad and the puddings and custard tasted good. (As long as the custard didn’t get a skin). Even though Connor thought otherwise, he always tried to pinch the potatoes. One of the lovely nurses was always taking the mick out of his Northern Irish accent and calling him “Potaattoooo!” It was funny and kept us amused although I’m pretty sure she fancied him.

18:00 – 20:00 Visitors: During these hours it was often Connor or my Dad who visited. My Dad was working very hard on the loft during the day… or playing golf. I was surprised at how exhausted I was by this time and was often wiped out if I had had visitors during the day.

20:30 Say goodnight to Connor: I never did get used to saying goodbye to Connor. It pained me to see him walking away. I waited for him to turn around and wave before he exited the ward. I cried every time he left. I waited until he was gone to cry so he thought I’d be absolutely fine and not know how scared I was without him by my side. I did this with all my visitors to show them I was ok in here and hopefully they wouldn’t worry so much. I had a good cry and then get a kick from one of my girls. A reminder kick that I wasn’t alone and I had my girlies with me. The kick was enough for me to sort myself out and get ready for bed, ready for Love Island to start.

One Friday night, I was very excited when I looked out of my window to see lots of firemen and three fire engines. Hello Firemen! Sorry Connor. I naughtily peered out of my window and sneakily took a photo to send to my friends and sister. Maybe they were coming to rescue me??!! I felt like Rapunzel. Haha I laughed to myself, imagining throwing down my hair and getting rescued by a fireman. Maan, I needed to get out of this place, I was going crazy!! It did make me chuckle to myself and I told my girls this was our secret and they weren’t to tell their Daddy. 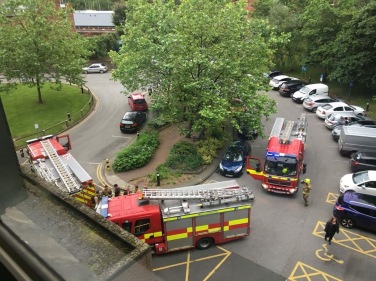 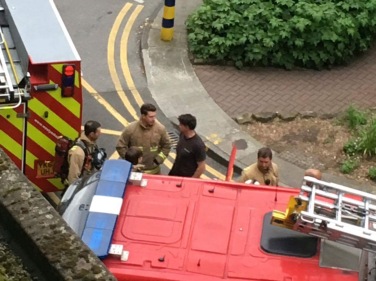 The second Saturday night, I felt very lonely, I was fed up of the hospital, the hospital food and feeling lost with my life. I tried continuing getting ready for bed and cleansing and moisturising my face but I couldn’t do it. I sat on my bed, put my head in my hands and cried. These tears were coming from deep in my heart. Some were tears of desperation. Some were tears of hope and longing that everything would be ok. I just wanted to be hugged and be told my girls were going to be just fine. But no one could tell me as it was down to time. I managed to stop crying and vacantly gazed out of the window. The sun was glistening through the trees and the warm rays felt like they were hugging me. I felt my Grandad’s presence. He was there with me, holding my hand, I wasn’t alone. My tears turned to happy tears. I sat on my bed with my beautiful big bump and enjoyed the feeling of the evening’s sun rays on my face. It was peaceful and calm in the ward and I felt safe.

21:00 – 22:00 Observations and Love Island: I looked forward to watching Love Island all day and every night I had to hide my irritation at being interrupted for my observations. I didn’t mind if it was a student nurse doing my ‘obs’ as I got to update them on what was happening and we enjoyed gossiping about the contestants as if they were our lifelong friends.

When I reached 26 weeks I had to have the girls heartbeats traced. This involved having gel on my tummy and having two heartbeat monitors strapped round me. I had to press a button every time I felt a movement.  It was only supposed to take twenty minutes to get the trace but because the girls were still so small and kept wriggling, it was difficult for the midwives to locate them and achieve two separate traces.  I was often attached to these monitors for two hours until the midwives were satisfied they had a trace of two separate heartbeats. One night I was on it for over three hours and had to wait for the doctors to come with a portable scan to locate where the girls were lying to find each of their heartbeats. I had the scan at 2am. I got excited to see my girls on the scan and find out if Twin 1 was still on her cord. Sadly they were in a hurry and I didn’t get to see much and was informed the cord was still showing as ‘presenting’. I was shattered and in a lot of pain from lying on my back for so long, with their heads under my ribs, my tummy and bed sheets covered in gel and desperate for the toilet. Once the heartbeat traces began, the girls became known as the Naughty Twins. I quite liked this as they were already showing their little personalities. I’m pretty sure the midwives dreaded doing my trace as it was so difficult to get two clear readings. If they did achieve a good trace, they told all the staff and were very proud of themselves. Good Twins! Despite being so uncomfortable and the middle of the night, I did actually enjoy it when the midwife had to hold the monitors in place (the girls kept moving away from them), as it was a chance to talk to someone, to not feel lonely and to distract me from feeling frightened.

Sleep: Other than frequent toilet trips and swigging my Gaviscon due to horrendous heart burn, I managed to sleep ok. This was of course achieved by stuffing my ears with industrial ear plugs (thank you to my sister) and wearing an eye mask.