The hardest days in hospital were living in fear of the unknown, staying strong and continuing to put one heavy foot in front of the other. Those days my life became a living nightmare and I had to face my fears as they hurtled towards me from every angle.

Our life had become an emotional roller coaster. We were forced to live our summer by the day. I didn’t allow myself to think too far into the future as there was the uncertainty the days we hoped for might never come. Every day brought with it its own challenges. Between Charlotte and Esme, they faced many premature baby problems. I never knew where I was. It was difficult keeping track of all their ups and downs especially as there were two of them, they seemed to keep ticking every box that a premature baby might have to overcome. During the times they were stable for a few days, it was hard to not wonder how long it would be before one or both became poorly again and we would be informed of more devastating news.

If it wasn’t for the friendly and loving nurses and staff in the neonatal ward, I would have found it a lonely place. During my time in intensive care, I seemed to speak only to other Mums in the milk kitchen, when we washed and sterilised our expressing kits or collected our bottles to take home. I got to know other parents who had babies in our intensive care room or the one opposite but only by smiles. These were knowing smiles; “hang on in there” smiles; smiles of hope. I would see these parents for only a few days, or at the most a week, as they were either moved to different rooms or they disappeared overnight. The latter was the worst. It was harrowing to see the empty incubator when we arrived in the morning.

When Charlotte and Esme were born, there was room for a total of three incubators in their room. The intensive care room opposite had room for only one incubator. In their first week, we got to know the family of the baby opposite. The baby looked much bigger than Charlotte and Esme but we never found out why she was there. I was desperate to know but I never found out.

Throughout the day, we exchanged smiles and any updates. Conversations were brief but I looked forward to them. There was a sense of normality and a feeling that being in intensive care didn’t only happen to you. In a sad way, you were grateful for their company. They could empathise with you. The father of the baby was always there, he said he stayed overnight on the sofas in the Parent’s Room. I was quite shocked at hearing this and a wave of guilt passed over me that I wasn’t with my girls all day and all night too. I saw the mother and chatted to father’s mother a few times. I often glanced in to see the father leaning over the incubator holding his baby girl’s hand, with nothing but worry and love written all over his face.

One morning I arrived and the room was empty. This was the first time I had witnessed a baby vanishing. Had something happened? Where had they gone? I had often thought we would stay in touch and see our three girls grow up together. Reminiscing how we met and how the intensive care days were long behind us. It became apparent, this would never happen. After a couple of days I saw him from a distance. Thank goodness, his baby was ok, they had just moved rooms. I imagined his baby had made good recovery and they were now either in high dependency or recovering from surgery. A few days later, I watched through the intensive care window as he left with his hand covering his face and his mother’s arms around his shoulders. I didn’t see him again. It dawned on me what might have happened. I stopped my thoughts immediately and refused to come to terms that some babies never made it home.

We’d been in intensive care for a few weeks when a very small baby arrived in the incubator next to Charlotte’s. I felt desperate to know his story; how old was he? Was he going to be ok? Why was he born so early? His mother often sat there by herself, gazing for hours at her baby. Some days the father came and other times a young girl. I once watched this girl, maybe aged thirteen, as she sat there by herself holding the little baby’s hand. Was it her younger brother? As she sat there crying, my arms wanted to hold her and tell her the baby would be ok but I couldn’t. The nurse did a great job of comforting her and knew the right things to say. The mother and I often shared empathetic looks. On many occasions I wanted to ask how he was doing but something held me back. I came in one day to see her crying softly into her hands. I was aware she didn’t speak much English, so I went and gently put my arm around her shoulders. She eventually looked up with grateful, kind but sorrowful eyes; eyes which had begun to lose hope and were leading towards despair. I had no words for her.

The next morning the baby and mother had gone. I wanted to know where? I prayed for it not to be the worst. One of the Dads opposite had told Connor he had seen the consultants working on the baby throughout the night. Due to confidentiality the nurses weren’t allowed to say anything but I guessed what had happened by their sympathetic faces. I wanted to reach out to the woman but I couldn’t. This instilled fear in me even further. On these days, I didn’t care that I couldn’t see Charlotte’s and Esme’s faces; hold them; feed them; see them together in a cot or take them home. I was just grateful that both of my babies were alive. They had overcome so much and each day they continued to fight their battles to survive. It was tough to understand and acknowledge this was now my life. 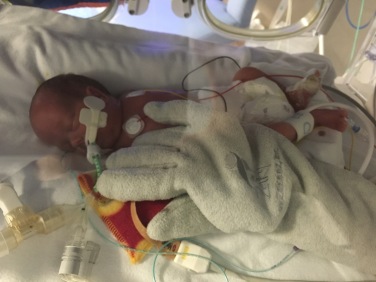 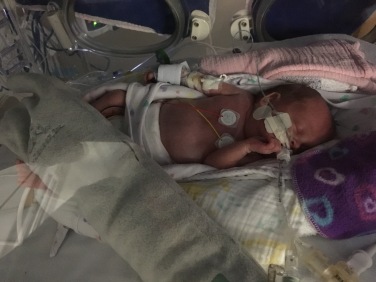 Over the summer, I saw many babies and families come and go from the intensive care room. The door to the other intensive room was always open and sometimes I needed to go through to retrieve an armchair or stool. Some babies I saw made my heart stop. They were maybe just bigger than my hand, far too small to be out of their Mummy’s tummy. I tried not to look but curiosity often got the better of me. The majority of babies I saw, especially for the first month, seemed much better than Charlotte or Esme.

Today, I find it extremely difficult to watch the Pampers ‘Little Fighters’ TV advert. Although it was designed to let all parents of premature babies know that these nappies are now available and aimed to raise awareness of the daily struggle of these babies, I found the advert insensitive. I couldn’t watch it at first, it brought back everything too quickly and I wasn’t prepared for it. Then I could watch it only if the sound was muted. It took a lot of courage to listen to it as well. I found the background music so painful because it is “I’m coming home”. It brought back too many hurtful memories, I became anxious the advert could come on and angry that the lyrics they had chosen weren’t always true. Although I thought the advert’s intentions were good, I felt it was heartless, as I knew that so many premature babies don’t make it home. Over the summer, I had seen too many hearts broken. I got in touch with Pampers and they apologised for any upset the advert may have caused.