For the first few months of having Charlotte home, I found night-time and early morning feeds the hardest. Even though I had Charlotte cuddled into me feeding and Connor was there asleep, I felt lost and lonely. I longed for Esme to be back in my life. My arms and my body craved to hold her. It was during these times that I felt it was ok for me to cry. It was safe for me to let my guard down and feel large, heartbroken, salty tears roll down my cheeks, wanting nothing more than to be with Esme once more.

During night-time feeds, when I felt ok or didn’t want to grieve, I did online shopping. I always found it funny, but I don’t think Connor did when I told him of the ‘necessary’ things I had bought at 3am. He was always fine even though he hid under the pillow before hearing of the damage to the bank account.  He knew it was helping me, although he was very relieved when I took up knitting.

When grief did hit during those feeds, I sometimes just cried for Esme. In the mornings, I would be feeding Charlotte in bed and if I looked up I could see the beautiful framed photograph of Esme in the corridor. It was comforting but hurt to see her knowing I wasn’t able to hold her. Other times I googled poems about baby loss and losing a twin. This particular poem I found on tamba.org.uk. The author of this poem is unknown but it does state ‘for Jake and Thomas Born 03/07/00 at 25 weeks. Thomas was sadly taken on 06/07/00, three days old’. The poem struck a cord and helped me to make sense of what had happened. I added Charlotte’s and Esme’s names to it:

When Two Become One

When two become one, sometimes one becomes two,
And the miracle of life emerges through you.
Some like to come early, some like to come late,
For reasons of their own, Charlotte and Esme couldn’t wait.
There’s no reason, or rhyme or time that is right,
No matter how young, the tough gals will fight.
Watch them and see, they want to live,
They already understand, they’ve got so much to give.
Esme had so much she gave it to Charlotte,
In the hope that it would keep her big sister awake.
Esme isn’t here now but the loving goes on,
In the knowledge that they’re together when the two became one.

There were a few mornings when Charlotte would be sleeping and I should have been getting ready, but I just couldn’t get out of bed. Energy had left me and I was weighed down by my broken heart. I wanted answers for my grief, for my loss. Why did it have to hurt so much? Why did we have to lose our baby? Why did Charlotte have to lose her twin sister? We were going to give Esme a good life, why was she taken from us? Of course, there never were any answers.

On those mornings, I listened to Coldplay, Everglow or Elton John’s “Tiny Dancer” and cried. I often had to ring one particular friend who always helped dig me out of the dark hole of grief I had fallen down, bring me back to the real world, make me smile and laugh and get my arse out of bed. She’s a great friend and worked wonders every time. I always felt a million times better after speaking to her and ready for my day.

On one particular morning when Charlotte was having her morning nap my arms ached so much to hold Esme. I longed to hold her. I played Elton John, “Tiny Dancer”, held my arms in the position I held Esme and closed my eyes tightly to bring back the treasured memories of her and slowly swayed around my bedroom. My heart hurt and ached so much. To this day, I can put my arms back in the exact position I spent those seven weeks holding her; my right arm safe across her back or cupping her head and my left hand under her little bottom.

Those mornings were the hardest. Living through the pain of a broken heart is torture. My arms longed to hold her and rather than be able to cry the pain away, my breath would get stuck. I would hold my breath for a few seconds, not ready to let go of that pain and then unable to hold it for any longer it would come out in silent, heart bleeding tears. Those mornings, it wasn’t enough to know Esme was safe in my heart, I needed her.

However, I did it, I survived, and I did what it took to get me through those days and put one foot in front of the other, no matter how small each step was.  Charlotte needed me and I needed her. It was often the hardest mornings which turned out to be some of my best days with Charlotte. 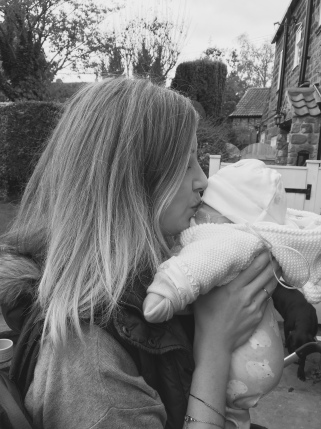 When close friends and family visited I sometimes showed them Esme and Charlotte’s keepsake boxes from the neonatal unit. I am very proud of what my girls achieved. It took courage to open the boxes but I couldn’t keep them closed forever for fear of the emotions I might experience. I wanted to do it in the comfort of the company of my friends and family, when I knew they would hold me if things became too much. The first time I opened Esme’s box I automatically lifted her sleepsuit to my nose and was surprised when it still smelt of her. It shocked me and it wasn’t long before the tears started. I wanted to run and hide under the covers and hold the sleepsuit close and pretend she was still here but I couldn’t move. My friends were there for me and that’s what I needed.

A month or so passed before I opened Esme’s box again to show some friends.  I lifted the sleepsuit again to smell it, except this time I could no longer smell Esme. She was gone. I felt like I had lost her all over again and my heart ached for her. A realisation, a harsh slap across the face that my baby girl wasn’t coming back. My kind friend, who is a mother to twin boys was with me and gave me a tight squeeze and firmly told me, “Esme is in your heart, she always will be, don’t you forget that.” I haven’t. Esme will always be with me.

For many months I looked for Esme everywhere. I was desperate to see signs to know that she was ok and to know what she was up to. On my walks a little white butterfly would follow me around, sometimes fluttering next to me other times flying into me. It would make me smile and feel happy and helped me understand that Esme was ok. On other days it upset me and I felt sad, borderline pathetic that all I had was a white butterfly to remind me of my daughter, until I spoke to my counsellor. She asked me “Why does the butterfly remind you of Esme?” I replied, “Because it is pure, free, delicate and pretty.” Her response was “What a beautiful thing to remind you of your daughter.” I instantly felt happier and no longer pathetic.

On my walks I often do a circular route which has always been known as ‘the graveyard walk’. When we moved to the village I never imagined I would be visiting where my daughter was buried. Some days I go in to see her and the dogs wait patiently on the path. Other days I just say “Hello Esme.” through the hedge. It’s a very strange feeling to find it is part of my daily routine to visit where my daughter is buried, but that is how my story goes.

I often had this thought which I initially found disturbing until I spoke to my counsellor. I imagined I would have a crazy, mad moment and take a shovel to Esme’s grave and dig and dig until I got to her basket, to open and give my little girl just one more cuddle, just one more kiss on the top of her head, even though I knew it would be a heap of tiny bones, lost in a red and white stripy sleepsuit, that I would be cradling in my arms. My counsellor explained it is very common for people to want to see someone they’ve lost, just one more time. That made sense. That was all I wanted to do, to hold and give Esme just one more kiss. I no longer felt like a mad woman.

On some days I want to know whether how I imagine her lying in her basket is how she actually is. I’m happy that I trusted the nurses and the funeral director but part of me often wonders what she looks like. Are her toys in the right place? Is my letter near her? Is her blanket tucked up around her? I know the answers to these questions and understand it is only the thought/idea of wanting to check each of these things just one more time. It hurts a lot.

As a burial is something I am not used to in my family, it took a long time to accept and understand that my little girl was lying underneath the mound of earth in front of me. My eyes would sting to imagine it and my heart would feel like it was bleeding. I sometimes have awful thoughts that it is now just her bones in there but I often stop these thoughts as they make me feel sick and distraught. In time, visiting Esme has become my favourite place. A place where I feel the closest to her and feel safe. Visiting Esme allows me to talk to her as if she is in my arms. I can talk to her like her Mummy. 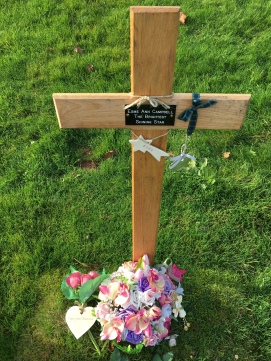 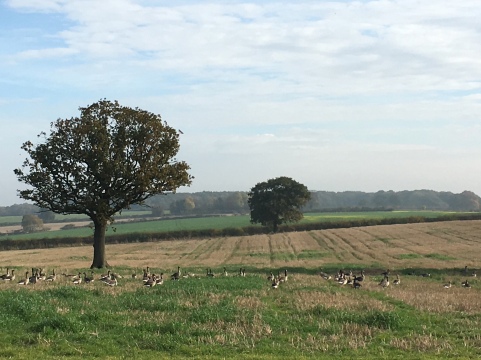 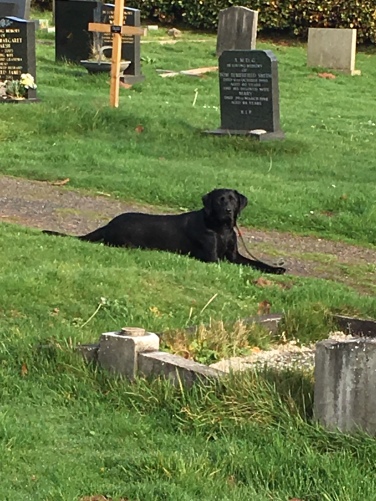 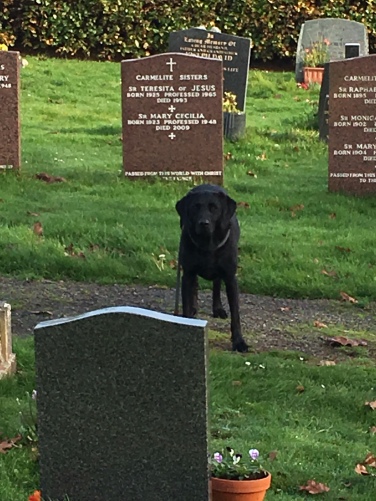 Whenever I met someone and they asked questions about Charlotte, I felt the need to tell them she had a twin sister who sadly isn’t here anymore. I told them not because I wanted them to be sad for us, I just felt the need to share it. The need to acknowledge that Esme was here and that Charlotte was a twin. It wasn’t until I started counselling in March that I felt comfortable (if I felt it was necessary to say so) introducing Charlotte as a surviving twin. Prior to counselling whenever I said “Charlotte is a surviving twin” I felt like I wasn’t including Esme and it filled me with guilt. Now, I always say ‘surviving twin’ and although the face of the person I am talking to turns sad, the conversation doesn’t plummet into an uncomfortable, awkward silence.

In the first months after Esme died I would often talk about her with no emotions attached. It was almost as if she wasn’t my daughter who had died only a few months ago, even though behind my brave face I knew deep down my heart was aching and I knew too she would always be my daughter. You could say I was numb but to this day I can detach myself from my emotions and talk about her and tell people exactly what had happened. In my head, it sounded like I was reading from a script, but I have always felt that for my sake and so that Esme is remembered, it is important to talk about her. Depending on who I am talking to or the mood that I am in, I may let my guard down and my emotions flow free.

Esme was, and she still is, my daughter and will always be a big part of my life. 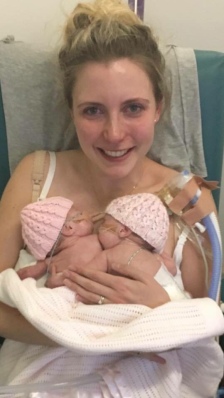 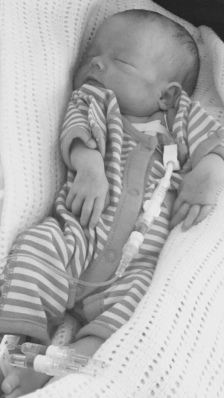 5 thoughts on “Just one more time”